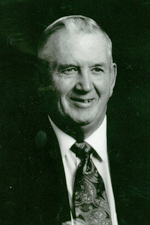 During the late 1940’s and early 1950’s, Branford High School athletics enjoyed a long-range basketball ace who had great aim and direction.  Later, 1996 Branford Sports Hall of Fame inductee Louis Locarno converted his athletic attributes to the football field as an opportunistic, speedy, pass-catching end to help the Hornets achieve a successful season.

In his freshman year at Branford High School, Lou competed on the varsity basketball team, a feat that was not often accomplished by first year players.  While on the hoop team, tonight’s inductee helped the Hornets to a 10-8 record.  He was also a catcher for the Branford High School baseball team.

As a sophomore on the basketball team, Lou led the Hornets to a 13-6 record, which included a 20 point effort against Windsor High School in the C.I.A.C. playdown game, a contest Branford won by the final score of 66-38.  The team would eventually fall to Sacred Heart 41-38 in the quarterfinals of post-season play.  During the 1948-49 season, Lou played in all 19 games, led the team in field goals (132), pointed scored (307), and average (16.1) and was the team’s high scorer in 11 of the 19 games played.  That year, Lou was named to the Class B All-Tournament Basketball Team and honorable Mention New Haven Register All-State Team.

Tonight’s inductee played football during his junior season as pass-catching end under the supervision of coach and 1992 Branford Sports Hall of Famer Warren Sampson, and teamed with 1993 Branford Sports Hall of Famer Joe Paul.  During the season, he aided Branford to a 13-0 win over Derby High School by returning an interception 75 yards and later connected on a five yard touchdown reception.  Lou excelled on the basketball court again during the 1949-1950 season by leading the team in games played (22), field goals (101), free throws made (62), free throw attempted (104) free throw percentage (.596) and total points (264).  Acting as captain for Branford that year, Lou led the team to 10 victories in 22 contests, including an 80-44 decision over Shelton, where he netted a record 34 points, breaking 1993 Branford Sports Hall of Fame inductee Joe “Butch” Naimo’s old record of 33.

During his senior year, the Hornets football squad improved to a 4-3-1 record and Lou was named to the All-Housatonic League Team and All-State Second Team as a receiver.  He played on the basketball squad during the 1950-51 season and led the team for the third consecutive season, scoring 371 points.  The Hornets posted an impressive 14-5 record, including a 10-2 league record, a victory over the defending Class B Champion, Stonington (47-46), a court win over East Haven High in four years by the score of 51-36 and a 64-62 decision over Lyman Hall to successfully hurdle its last obstacle to the Housatonic League basketball crown.  In the Class B Tournament Quarter Final game, Branford was edged out by Woodrow Wilson, 57-56 but Locarno was named to the Class B All-State Team.  Over a four year span, Lou played in 66 games, and scored 1,066 points (16.3 points per game average).

After graduating from Branford High School, he attended Hopkins Grammar School where he played football before enlisting in the Navy and serving aboard the U.S.S. Walker.  Now retired from Bozzuto’s Carting Company, Lou is a softball umpire for the Branford Recreation Department.  He is married to his wife of 38 years, Alice, and the father to three children, Donna (Bozzuto), Laura (Josephson), and Karen (Locarno).  “Being inducted into the Branford Sports Hall of Fame is a really great honor.” Locarno said.