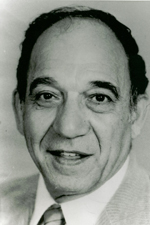 Known for his action to speak louder than any words, 1993 Branford Sports Hall of Fame inductee Joe St. John’s performance on the basketball court and on the softball field shouted success for the man labeled a “mighty mite” in the world of sports.

Born in New Haven, St. John attended the Boardman Trade school, where he played both basketball and baseball.  In his junior year (1936), the basketball team went to the finals of the “C” Tournament only to lose to Terryville.  Later, St. John played basketball in various amateur, semi-pro, and industrial teams, including the New Haven Grads, Old England Brewery, Sally Oilers, St. Michaels, West Haven Red Devils, New Haven Jewish Community Center, G&C, High Standard, Wallingford’s Big Five and the Branford Italian-American Club, which included 1991 Hall of Fame inductee Bill Hinchey.  St. John was known as one of the game’s “mighty mites” – a performer whose ability enables him to hold his own against bigger men despite his five foot-six stature.  A steady, backcourt performer, St. John was recognized in the sport as a “feeder”.

Softball attracted St. John to the playing ranks in 1940 as a member of the Sabby’s Restaurant team.  After one season with the Reil’s Club, he put in three with the Arena Grille squad.  That affiliation ended temporarily when he played for the West Ends of East Haven in 1948 but he rejoined the Arena Grillers in 1949 and went along when the squad changed sponsors in 1950 to become the Columbus Bears.  St. John played second base and third base until taking over the coaching reins in 1951.

In his two years as coach, 1951-52, the Columbus Bears enjoyed the greatest success in team history.  In 1951, the team won its first state tournament to be captured by a New Haven area team and finished as the runner-up in the New England Regionals.  The next year, Columbus went all the way under St. John’s direction, copping both the state and regional championships to become the first New Haven team ever to capture the sectional honors.  In1974, St. John was elected into the Connecticut Softball Hall of Fame, one of the high points of his career in sports and also inducted into the Tap-Off Club’s Hall of Fame.

St. John, married to the former Mary Biondella, is the father of three children – daughters, Joan and Annette, and son Steve.

“I was very thrilled when I received a call saying I was inducted into the Branford Sports Hall of Fame.  I was glad to join.  I was glad to be recognized by my peers,” said St. John.