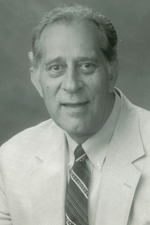 Seasons change and athletes come and go, however the one successful fixture at Branford High School since 1957 as a coach and later as athletic director has been 1993 Branford Sports Hall of Fame inductee Joe Farina.

A native of Midland, Pennsylvania, Farina played his high school football for Ray Tellier at Wilbur Cross High School in New Haven.  He also played basketball and was also a shot-putter for the track team.

Under head coach Jess Dow, Farina played college football at Southern Connecticut State University as a center and linebacker.  He was past of the Owls illustrious undefeated team in 1956, where the team outscored its opponents 317-45 with five shutouts.

He began his coaching career in 1957 at his Alma Mater and came to Branford in 1958 as an assistant coach to 1992 Branford Sports Hall of Fame inductee Dom Cote.  Branford was State Champion that year going undefeated and then won 17 games.

Farina returned to Southern Connecticut in 1960 as Offensive Line Coach and remained there until 1969 when he returned to Branford as Head Coach.

During his ten year coaching reign, Branford placed second in the very tough Housatonic League three times and many of Joe’s players gained some degree of fame.

Coach Farina has had many thrills at Branford-including “Coach of the Year” in 1975 by the National Football Foundation, serving as a coach in the 1972 “Nutmeg Bowl” and being named Head Coach for the East Team in the same Bowl Game in 1976.

Joe is also past President of the New Haven Board of Basketball Officials from 1975 to 1976 and has officiated in many tournament games as well.

The coach has been active for many years as a member of the Branford Gridiron Club, President of the National Football Foundation and Hall of Fame, President of the New Haven Tap-Off Club and as President and Director of the District 10 Board of Basketball Officials.

Joe, his wife, Rosemarie, and daughters, Diane and Denise, reside in Branford.

“I’m quite overcome by it (induction into the Branford Sports Hall of Fame). Not being a Branford native, I’ve lived here since 1958 and have come to feel as though I’m a native of Branford.  It’s an overwhelming thing on the part of the people who are responsible for this,” said Farina.