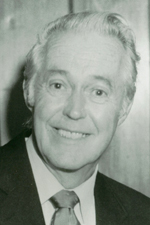 Throughout his athletic career at Branford High School, 1995 Branford Sports Hall of Fame Inductee Jim Murphy made his presence felt on the football field, on the basketball court and on the baseball diamond in more ways than one.  His tall, lanky build made him a godsend to his teammates yet a nightmare to his opponents.  However, regardless of the final outcome, “number five”, as he donned so often as a member of the Hornets, remained the smooth, quiet and refined sportsman on and off the athletic field.

Born on July 8, 1929, Jim was a three-sport athlete and achieved a total of nine school letters in his sophomore, junior and senior seasons.  “Murph” as he was called, played tackle on the Branford Hornets football squad during the 1944-45 school season with 1993 Hall of Famer Bill Mischler.  On the basketball court, tonight’s inductee could be found only at one logical position-at center, playing alongside Mischler, 19912 Hall of Famer Bill Hinchey and playing for coach and 1992 Hall of Famer Warren B. Sampson, Jr.  As a first baseman for Branford’s baseball team, he enjoyed the success of being on the runner-up Housatonic League team, winning six of its first eight games.

In his junior season, Jim was an instrumental part of Branford’s 17-5 season, which included a Housatonic League Championship and repeat performance as Class B State Champions.  That season he scored 210 points while averaging 10 points per game, highlighted by his performance in the state title game against Stonington, where he netted 26 points, many of them coming as a result of his forever famous fade-away shot which was unstoppable.

The Hornets continued its winning ways during the 1946-47 season.  Following a season as the /Hornets football captain and Honorable Mention to the All-State Team, tonight’s inductee became a gigantic part of Branford history, when the basketball team went undefeated(18 regular season wins and three playoff wins) to capture its second Housatonic League championship and third state championship.  That year “Murph” scored a team high 341 points (16.2 average) and following the first half of the season, was greeted by double and triple team defenses by the opposition.  Branford held a 34 game winning streak dating back two years after they reached the end of tournament play.

After high school, Jim attended Suffield Academy Preparatory School for a year before heading to the University of Connecticut, where he played basketball for two years with Bill Mischler.  As he concluded his duties in the service, “Murph” attended New Haven State Teachers College and played one year of basketball for former Owl Owen McDowell.

Voted in high school as Most Athletic, Most Popular, Best Looking, Class Heartbreaker and Boy with the nicest smile, this serviceman of the Air Force is married to Mary G. Murphy and is the father to four children:  James, Mary Kate, Terrence and Timothy.  A manufacture representative for T.J. Mar for 26 years, Murphy lives in Meriden, CT a place he has called home since 1954.

“It’s an honor to anyone to be inducted into the Branford Sports Hall of Fame especially to those who played sports in the town.  I’d like to thank the committee for acknowledging my fellow inductees and myself.  This will have a special meaning to me always,” said Murphy.