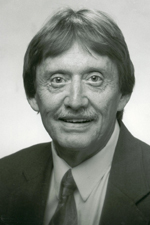 Warrior.  Hero.  Leader.  These constant, well-deserved accolades describing 1996 Branford Sports Hall of Fame inductee Bob Tobin’s work ethic as an athlete in high school and college, a Physical Education teacher in the North Branford education system, and a coach in youth sports proved without a doubt the paramount level of success tonight’s inductee has brought to his family, the town and to himself.

As a junior, Bob played on the varsity basketball team which went to the semi-finals of the state tournament.  In 1961-62, Branford won 16 games including post-season wins against Griswold (68-50) and Wilcox tech (68-58) before losing to New Canaan, 66-54.

In his senior year at Branford High School, Bob earned many awards on and off the field.  He was named Most Valuable Player in both football as a quarterback and in baseball.  He was selected captain of three sports, football, baseball and basketball.  Bob was also selected All Housatonic League in football and baseball and as All-State Second Team in football.  Tonight’s inductee also received the Savitt Sportsmanship Award for basketball in his senior season.  While on the hoop team in his final year, Bob was second on the team in points with 183 and average10.1 points per game per game on a team which finished with a 9-9 record.  The football team finished with a 6-2-1 record.

Following graduation, Bob attended the University of Bridgeport in 1963, when he was the quarterback of the first and only undefeated freshman team.  That year, he set records for touchdowns, passing, rushing and extra points.  In 1964, Bob transferred to Southern Connecticut State College where he played quarterback from 1965 to 1967.  During Bob’s stay the Owls posted a 19-9 record and won three Eastern Football Conference Championships.  Bob also played baseball for the Owls and was part of the 1965 team which on the Northeast Collegiate Title at Yankee Stadium.

A physical education teacher at North Branford Intermediate School for the past 29 years, Bob has coached football at North Branford High School and basketball and track at the middle school in addition to playing softball for Branford teams including John’s Restaurant, Hillside Café, Elm Café and the Silver Dollar Restaurant.