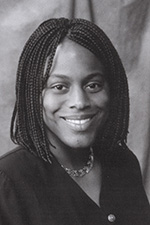 The situation was constant during her playing days as a leading force in volleyball and basketball at Branford High School and Harvard University.  An energized opponent, a vocal crowd, and a confident  outlook quickly transformed to overwhelming concern, a hushed crowd, and sheer trepidation as 2001 Branford Sports Hall of Fame inductee Beth Chandler made her presence known to her rivals.

While attending Branford High School from 1980 to 1984, Beth was a key member of two state championships in basketball, as the Hornets won state crowns in both 1982-83 and the 1983-84 seasons.  Branford also achieved national ranking during those years.  In her sophomore season, this team led by Branford Sports Hall of Fame and head girls’ coach Dave Maloney (’97), will be remembered as one of the finest in Branford history, as they won seventeen of eighteen games.  As a junior,  Beth played on the undefeated basketball team, going, 24-0 and winning the Housatonic League and Class “L” State titles.  That year, the team earned the number five ranking nationally in Parade Magazine and the number eight ranking in the USA TODAY poll in addition to the number one ranking in the state.

A New Haven County Scholar-Athlete, she was named to the All-Housatonic, All-County, All-State, and All-American teams during her high school career.  In her senior year, she was a team captain with fellow inductee  Bethany Collins-Irwin (’00).  Beth was a unanimous All-Housatonic pick following her senior season. Against Amity, she scored a season high 25 points and in the last game of her high school career scored a team high 17 points and pulled down 13 rebounds to defeat Masuk, 56-47, in the state championship game. She ended her career with 1,031 points and 720 rebounds.  Both are third best on the all-time Hornets’ list.  One record that Beth holds, which may never be broken, is a 64 percent career field goal shooting percentage.

Tonight’s inductee also excelled on the volleyball court.  She, her teammates, and Branford Sports Hall of Fame inductee and volleyball coach, Toni Cartisano (’93), claimed three successive state championships. As a sophomore, Branford won twelve and lost six en route to its state championship in the Class M Division.  In her junior year, Beth and the Hornets captured the State Championship, ending the year with a record of 28-0, the longest winning streak in Branford High School history.  Her teammate that year included Hall of Fame inductee Krista Blomquist Hall (’98).  The 1983-84 volleyball team returned to the state title game, after finishing the year with a record of seventeen wins and only two losses. The girls team was ranked number two in the Housatonic League and number one in the state while  Beth was a co-captain along with Bethany Collins.   Following her senior year, she was named to both the All-Housatonic and All-State teams.

Off the playing fields, Beth portrayed a true symbol of  class and community spirit. An excellent student, she was a member of the National Honor Society.  She was voted class president and was chosen to the All-State Choir.  Some of her many honors included being chosen the school’s Youth of the Year by both the Branford Lions Club and the New Haven Register.  Her awards include the Yale and Harvard Book Awards, the Hugh O’Brien Award and the Daughters of the American Revolution Award.

Following high school, Beth attended Harvard University and was a two year captain for the basketball team.  She ended her senior season by being named to the first team All-Ivy and team Most Valuable Player.  In her final season, she was the women’s basketball leading scorer (16.1 points per game), and rebounder (10. 0 per game) and set a  single season team scoring record with 418 points.  She ended her career with 977 points and set a school record for points in a game (32).  Harvard went on to capture two Ivy League championships during the 1985-86 and 1987-88 seasons.  She later played 2 years in Salzberg, Austria.

Currently, Beth is a National Coordinator of the Financial Industry Relationship Manager or Neighborhood Reinvestment Corporation and is a part-time assistant women’s basketball coach at Wentworth Institute of Technology.  Beth joins her dad, Joe, (1990)  in the Branford Sports Hall of Fame.  She also is the daughter to mom, Phoebe, and sister to her brother, Joe, Jr.